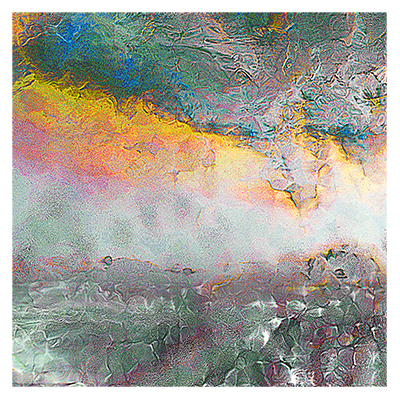 A childhood reconfigured, a child who could never be,
with cardboard carts of stones and stamps,
bundled with a string, with wooden wired
contrivances hidden from the world,
and yet the others whispered in his ears.

They told him of a place where wild basalt seas
crashed down upon the shattered mirror beaches,
and sleepless carriages fled the stations of existence.

In that land of co-located days and nights,
there was neither elevation nor revelation.
Beneath the inverse sky, everything
that might have been was broken.

I was in the shed, cordless drill in hand,
with drilling bit, a number nine.
I’d mounted shelves at a certain angles,
while my companion,
a stray chameleon canary,
made comment on my craftmanship,
the lack thereof.

She was currently a pastiche of sparrows
with a hazy cigarette, and I saw fit to warn her:

I suggest you don’t fly near the cesium,
or the other combustibles.

She exhaled a soulful middle C with a ring of smoke,
and pondered her existence.

If I merely follow truth, I will lose
my essence, my canaryness.

At that instant, I drilled into a power cable,
and, startled by a mild electrocution,
I descended with the sparking ladder
to the cesium, and the other combustibles.

Goodness gracious, I exclaimed to Her Canaryness,
who was fluttering near the ceiling,
I would never have imagined that.

Amidst explosions, electric arcs, and flames,
a doorway had appeared, leading to the other place,
and my younger self was standing there.

He did not speak, his eyes were sockets
filled with shattered tinted glass
(an expensive extra when you buy a car),
and all around a greyscale mist
morphed and curdled where it touched him.

The canary landed on my head.

Oh, you’re such a maudlin monotreme.
What are you waiting for?
Invite him in for tea and biscuits.

personal background
Occasional electrocutions; mistakes on ladders; slightly fiery experience with cesium, which ignites on contact with air and may not be transported on passenger aircraft. I’ve never drilled into a power cable. That would be silly.

artwork
amidst (part above) from VEE, the visual evolution engine.

World at Sunset #video_art (part, low res) made with the #visual_evo_engine for #surrealist #poetry Concrete and Clay at inconstantlight.com “Is it that everything is not, or is everything something else entirely?” “The universe, I’ve read, is a divergent sum of irredeemable repetitions.”
Alternating Realms, #video_art made with the #visual_evo_engine (fragment, no soundtrack) for #apocalyptic #poetry Transmutation at inconstantlight.com Do you remember what might have been before the soft apocalypse? Did you go forward with a weighing of abstention and acceptance?
Beneath the staircase in the shadows, #videoart K5 A1 O1 S1 A1 is lurking at Articulate in Leichhardt until Dec 22, tamed by @theimpermanentsecretary and me. We have fed it with photos, bellbirds, scrabble™ tiles, encephalic electro-audio, and cicadas: Cicada 1: Everything that has a heart must have a name. Cicada 2: I shall be Kaosa, of the dappled dance, of dying dreams of light. Cicada 1: I’ll be Serendipity, of neon in the night, with smokes and a pale mirror. Cicada 2: Your mouthparts are unsuitable for cigarettes.
Stills from #artvideo Kaosa, collaboration with photographic alchemist @theimpermanentsecretary. Made with the #visual_evo_engine for the @articulateprojectspace December show. Details & #apocalyptic #poetry at inconstantlight.com.
checking out goodreads