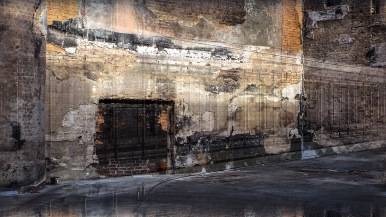 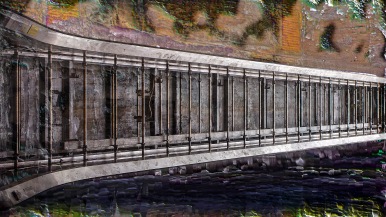 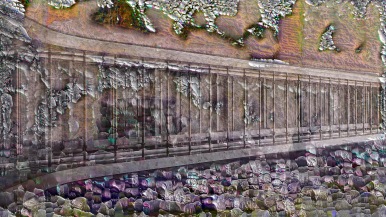 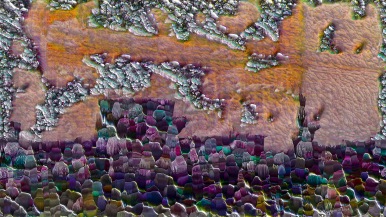 Previously on the Rewound World: four travelers searching for a luminous future beyond the apocalypse were dawdling in a café with very little to offer when the bearded waiter announced that he knew all their secrets. The first episode is here.

The waiter tore off his imitation beard
with flair, uncovering a more modest
beard beneath.

Much more will be revealed, he declared.

Dearest Deirdre, you seek salvation
in the natural philosophy of physics.
And yet beneath this very table,
a theory of alfalfa grows.

How green it is, yet pale, soft, and moist.
Does more than this require contemplation?
Don’t you know that nature’s nuts and bolts
are fixed with nuts and bolts?

Spectral Paulo, who once dined on humble salted crackers.
You daintily partook, but the blushing cheese
and perfumed baklava, the barely pickled herring,
were left upon their plates.

Their contact with your tongue
was far too multifarious,
their scents undid your senses,
unravelled all your thoughts.

You were waiting for another world:
after time, a second chance at living.
You thought timidity might still pass for virtue,
and now it’s all you have.

Anthropomorphic Ada, made of mysteries,
magic, and mechanics.

No no no, you say, when you confront
conceptual alfalfa, I must adjust
my trimming capacitors
with an insulated screwdriver.

Unaccepting of yourself,
you languish in the corner of a corner
where numberless magicians defy the numerate.

He turned to me.

And you. Your formless thinking
rises from the vacuum that the horses
of von Guericke failed to dislodge.

You’re everyone’s exaggeration,
a competition of addictions,
desperately seeking Martians
as if the burning earth were merely fiction.

After smokes and drinks and laughter have dwindled
in the salon, when you seek pluperfect secrets
in tricks of light that falls on motes and lolly wrappers,
remember you were touched by grace.

Otto von Guericke, of whom I have a small bust given to me by a visitor from the University of Magdeburg. Otto demonstrated that teams of horses couldn’t pull apart the Magdeburg hemispheres when they were joined to form an evacuated sphere. I suspect the horses didn’t try hard enough.

The bearded waiter’s error: there is no “after time” (or “before time”) because “after” and “before” only have meaning within the directed time stream.

artwork
Some stills from Kaosa, a video made in collaboration with the photographical alchemist Paul Sutton (insta). Kaosa will be shown at Articulate in Sydney: Articulate Turns Nine, 7-22 December.

21 thoughts on “rewound world 10: open the curtains of the past”