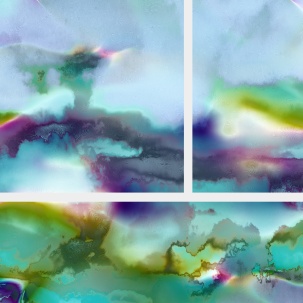 Last night I dreamt we went together to the sea
and joined the others gathered on the beach,
figures made of sand who dreamed within a dream
of alluvial forgiveness.

From the kitchen doorway
a flock of shadows flies out on the ridge,
and in the gullies yellowed smog
is bleeding from the ground.
The earth is sick, reclaiming its own,
and the far horizon is a never ending fuse,
unquenchable linear fire.

Splitting the atom was always going
to be a mistake.

Survivor’s dead-end penitence,
insipid vicissitudes—
I clean my glasses, wipe my eyes, cut some stale
bread with a rusty knife
and still the kitchen’s misty with my misery.

I’ve packed a picnic lunch and
now I’ll follow, trek along the valleys,
climb beyond the ridges to the terra nova.

If she’s not there, we’ll meet again
where pitch black waves are breaking on the shore
and everyone is made of sand.

Sometimes it’s  hard to choose between apocalypses. Nuclear annihilation is a bit old-fashioned, but it’s still one of my favorites.